I had just posted about Nokia MOSH and it’s a restricted beta, luckily I already got my password to access it. I created an account and uploaded my first content. I was really testing the site in parallel on my Mac and on my mobile phone.

Very first impression is that it’s an interesting new social site. It has all the common features such as upload a photo, invite a friend, exchange messages. The first question that comes to my mind is “So what’s new?”. Not very much I’d say, if you don’t consider that it’s made for mobile devices first and ALSO features a web interface. The main concept here is to be able to upload contents from your mobile device. This is nice and probably Nokia’s commitment is promising, but I don’t see it SO different from what Flickr Mobile has been offering for a while or even ShoZu.

But the very first question that came to my mind even before completing the registration was how they would recognize devices. The e-mail clearly stated that they will do their best to support all devices. Well, look at the image below and think… 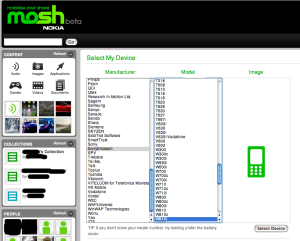 I believe they are using WURFL. Not very hard to guess since it’s free and very well supported by many developers, but at the same time you might expect a different approach from Nokia. Are they using WURFL as-is? Did they patch and optimize the Nokia devices? Are they going to give back to the community?
How can I say it’s WURFL? If you look at the screenshot you can see a few things that hinted this to me such as “Research in Motion Ltd” instead of “RIM” or “Blackberry” that are much better known names than the complete company name. Another thing is the duplicated “Vitelcom” and “VITELCOM for Telefonica Movistar”, I remember adding those values and wondering if they should be merged or not. Then there are a few brands that you would not expect to be possible to be picked from a list of devices such as “W3C”, “WAPUniverse” and “WinWAP Technologies” (the first one is obviously not a device manufacturer and the other two are companies selling a browsing software). Also, if you look at the list of Sony Ericsson devices, you can see the “W810”, “W810i” and “W810c”, but the “W810” does not exist, it’s a virtual that device we defined in WURFL and the different localized versions (i for Europe, c for China and a for Americas) inherit from it most of their capabilities if not all.

Going back to the service, I liked that once I completed the registration it suggested to point the browser of my mobile device to a mosh.nokia.mobi. Accessing the site via your desktop browser provides the very same interface… Since they have a version optimized for desktop PC’s it would be good to be automatically redirected to the other version OR have a link. Nokia, if you are reading, I suggest you use is_wireless_device from WURFL.

One bug that I already found was that when trying to upload from the mobile, I could specify the tags. There was no mention of how to do it, so I used commas as on blogger.com, but this did not work, so the upload was not successful. Since I was using Opera, I could not pick a file from the filesystem, but I had to use the camera, so I had to take another picture and, even worse, some, but not all of the information I had provided was lost such as the tags (of course) and the content title. This one needs to be fixed.

Born and raised in Italy, US resident. Innovator with a soft spot for developers. Currently director of developer advocacy @kin_foundation, previously @Samsung_IoT, @Nokia, an advocate of the open Web View all posts by atrasatti

This blog represents exclusively my personal views about technology and the world in general, it does not necessarily mean that my employer or companies I work for endorse my views or support them.

ALL COMMENTS are subject to moderation, if they don’t show up immediately, please, be patient.