I always run Rescuetime in the background, even though I have to admit I don’t check it so often (anymore).
It was interesting to see that the week before the DeviceAtlas 2.0 release my efficiency was very high. See here: 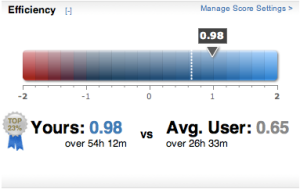 It should be noted that normally during the day I spend some time developing and some time writing specs, talking to colleagues, on the phone and so on, but of course, just before the release it was all about development. 🙂

Within the DeviceAtlas team, on Monday 29th September, we worked an average of 11 hours and 30 minutes, plus the what the designers worked, that is probably about the same. What a team!!

Born and raised in Italy, US resident. Innovator with a soft spot for developers. Currently director of developer advocacy @kin_foundation, previously @Samsung_IoT, @Nokia, an advocate of the open Web View all posts by atrasatti

This blog represents exclusively my personal views about technology and the world in general, it does not necessarily mean that my employer or companies I work for endorse my views or support them.

ALL COMMENTS are subject to moderation, if they don’t show up immediately, please, be patient.